The Most Beautiful Lighthouses in the United States 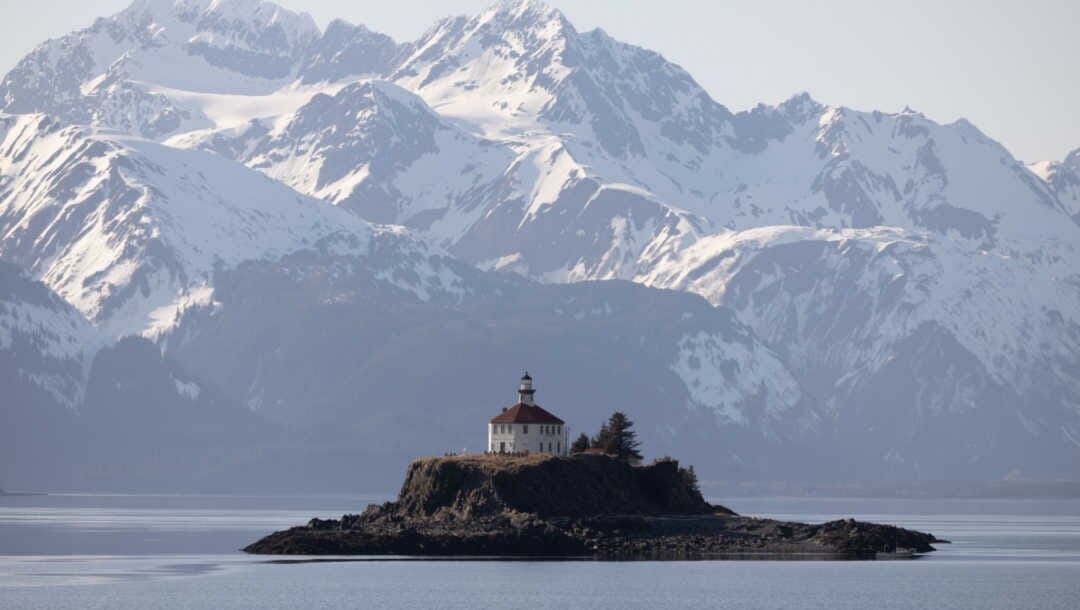 If you’re planning a road trip through the United States, why not explore the rich history and picturesque beauty of some of the most famous lighthouses in the country? Lighthouses were once essential for seamen for safety and navigation and today they remain classic landmarks.

There are a few things you’ll need to know as you plan your next adventure: how to create the perfect road trip playlist, the best places to eat and stay and of course, the most incredible sites worth seeing. What these sites will be will depend on your interests and with so much to see and do, it’s worth narrowing it down. In this blog, we’re exploring the most beautiful lighthouses in the country. If you find yourself playing ocean-themed online slots during your spare time, scheduling at least a few of these landmarks into your trip itinerary should chime in nicely with the theme and will be well worth it.

Surrounded by views of snow-capped mountains, Eldred Rock is an octagonal lighthouse situated on a tiny island in the Lynn Canal, near Haines. First lit on June 1, 1906, it’s the oldest lighthouse in Alaska and the last of 10 in the state built between 1902 and 1906. Constructed after a disastrous shipwreck of the Clara Nevada in 1898, the first keeper was Nils Peter Adamson who manned the lighthouse for five years before resigning after yet another tragedy took his two assistant keepers, John Currie and John Silander. Personnel were removed from Eldred Rock Lighthouse in 1973 and an automatic beacon replaced the manual operation.

While there are no tours to the lighthouse, visitors can view Eldred Rock Lighthouse by ferry or boat or from the surrounding peaks.

Constructed in 1871 to guide ships along the Pacific coastline, Pigeon Point Lighthouse, near Pescadero (about an hour’s drive west from San Jose and about the journey time south from San Francisco,) was an indispensable part of West Coast navigation. Perched on a cliff not far from Butano State Park, it’s the tallest lighthouse on the West Coast, at 115 ft high. The lighthouse began operating on November 15, 1872 and is now part of Pigeon Point Light Station State Historic Park.

While the original 2,000 lb Fresnel lens is no longer in use, an automated LED beacon means the lighthouse is still in active use by the U.S. Coast Guard. Visitors can take a guided tour around the lighthouse grounds from Thursday through Monday – and if you’re lucky, you might even spot a seal or whale around the surrounding rocky reefs! 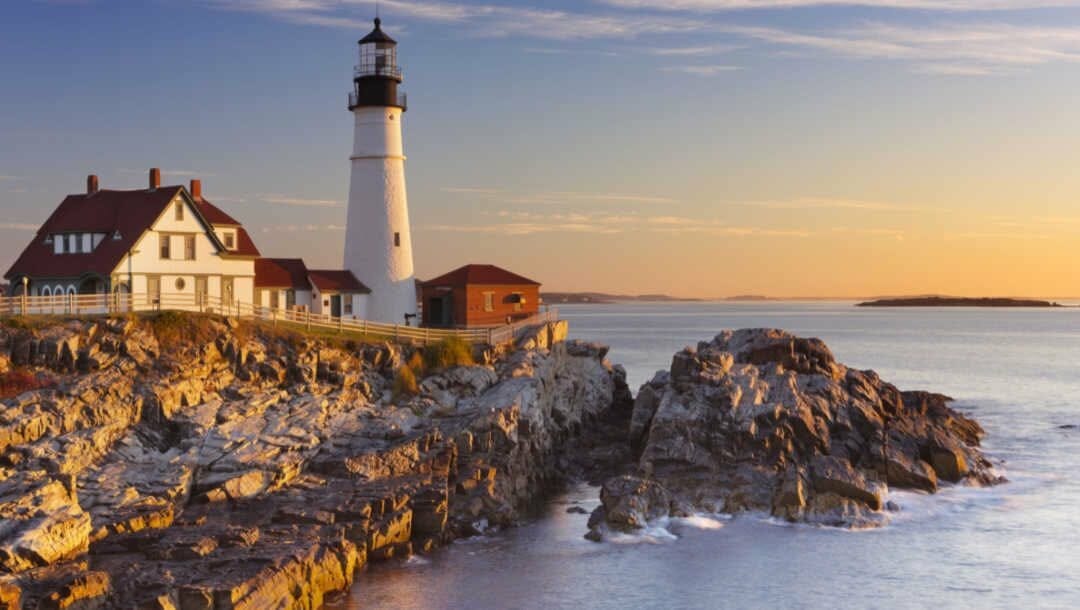 Portland Head Lighthouse in Cape Elizabeth was first lit on January 10, 1791, making it the oldest lighthouse in Maine. Built to warn of impending British attacks, the original construction was 72 ft high, but the tower was raised by another 20 ft in 1865. The lighthouse housed the head and assistant lighthouse keepers and their families until 1989 and was built on the edge of a low cliff overlooking the Atlantic Ocean, making it an incredible sight and the centerpiece of Fort Williams Park.

While the park is open year-round from sunrise to sunset, the tower itself is only open to the public one day of the year – Maine Open Lighthouse Day – on September 10 in 2022.

Michigan is home to the most lighthouses in any US state – more than 115 are stationed along the Great Lakes! Big Sable Point Lighthouse is one of its tallest, reaching over 100 ft. It was constructed in 1867 on the eastern shore of Lake Michigan near Ludington and from here, an easy 1.8-mile hike will take visitors to this black-and-white-striped lighthouse. For a meager $8 and climbing up 130 steps, you can take in the breathtaking views from the top of the tower. Incredible scenes,  both of the lighthouse and from its top, make it well worth a visit, with plenty of information about its history available during your visit.

Situated on the edge of a steep cliff southwest of Silver Bay overlooking the north shore of Lake Superior in a state park named after the landmark, Split Rock Lighthouse is one of the most visited and photographed sites in Minnesota. The lighthouse construction was completed in 1910 after a November gale wrecked nearly 30 ships just a few years prior. It has since been restored to its original 1920s façade and the octagonal brick tower is stunning to behold, both during the day and under starlit skies. Take a guided tour and visit the museum for the complete (and dramatic) history of the lighthouse. 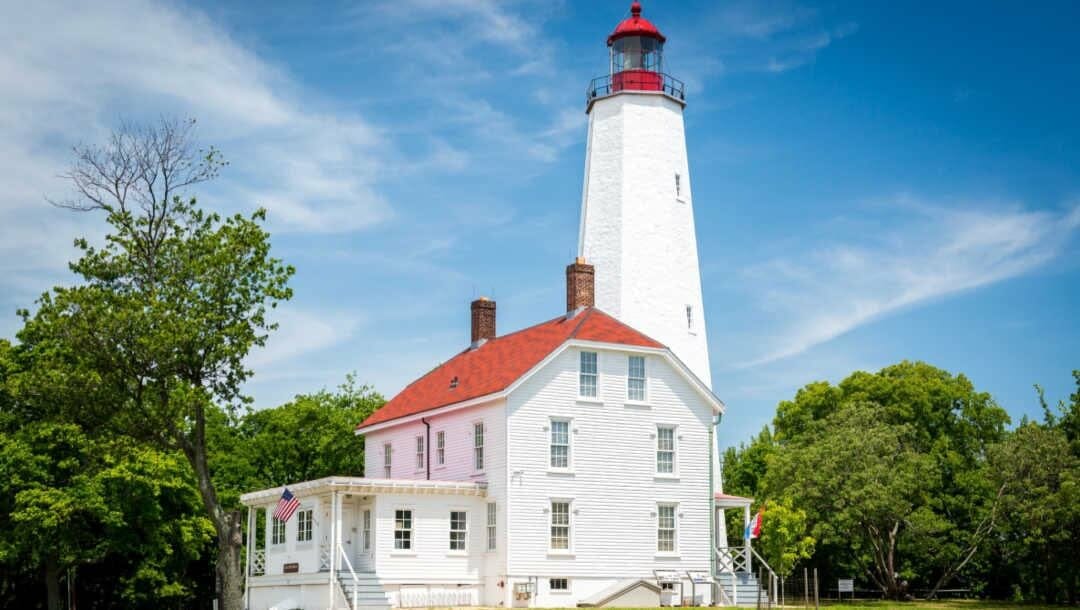 New Jersey is not just home to world-class casinos such as Borgata Hotel & Casino in Atlantic City; it also boasts the oldest remaining lighthouse in the country, Sandy Hook Lighthouse. Built in 1764 on Sandy Hook, a barrier spit in Middletown Township, Monmouth County, it was listed as a National Historic Landmark in 1964 and was restored to its original charm in 2000. Free tours are offered seven days a week between 1 pm and 4.30 pm, and the view from the top includes the Atlantic Ocean, Sandy Hook Bay and the New York City skyline.

Of course, if your trip doesn’t include a visit to the gambling-entertainment mecca of Atlantic City, you can always enjoy slot machine casino games and other online casino games using our mobile app!

Other beautiful lighthouses worth visiting

With more than 700 lighthouses across the whole country, it can be challenging to choose which to visit! Other popular favorites include:

Enjoy the best casino games in the US with BetMGM

Whether you’re interested in history and culture or casinos and gaming in the US, our country has something for everyone – and so does BetMGM’s online casino. From live dealer casino games to online casino slots and classic casino dice games, discover a world of entertainment when you register with BetMGM.