Gamblers around the world know that there’ll always be ups and downs when playing online casino games for real money, but wouldn’t it be nice if you could get a healthy dose of luck to turn a bad run around? Coming up, we take a look at some good-luck charms for gambling that might invite Lady Luck to the table or to your online slots.

The acorn is a charm that has connections to different cultures throughout history. The British have long believed the acorn can help protect against ailments that affect the body. In Norse mythology, the oak tree and acorn are connected with the god of lightning, Thor, and it was believed that keeping acorns in your home could protect your house from lightning.

Today, it’s still viewed by many as a symbol of good luck, and it’s believed that wearing an acorn charm could bring you good fortune.

In several European countries, including Austria, Poland, the Czech Republic and Croatia, the traditional Christmas meal includes a carp. In the past, this fish was kept in the family bathtub before being prepared for the Christmas meal, but this aspect of the tradition has fallen away in favor of carp purchased from a store.

After the fish has been prepared for eating, it’s believed that keeping a few of the scales from the carp will bring good luck until the next one is prepared the following Christmas.

Chrysoberyl, or the cat’s-eye gem, is a beautiful and affordable gemstone that’s not only known for its unique pattern but also as a lucky charm for gambling. Many people wear the semi-precious gem in a ring, necklace, bracelet or some other kind of jewelry so that it’s always on them.

It became a very popular item in the West at the end of the 19th century when the Duke of Connaught gave it to his fiancée for their engagement.

A Dala horse is a wooden sculpture that has been an entrenched part of Swedish culture for centuries, particularly in folk art. Originally created as a toy, Dala horses have become so symbolic of Sweden that many souvenir stores now stock them for tourists. With such a long historical connection, it’s unsurprising that many locals believe the Dala horse to be a symbol of good luck.

The second animal to make it onto this list is the elephant. In many Asian countries, not least India and Thailand, as well as other regions that have followers of feng shui, the elephant is an incredibly powerful symbol. This majestic animal is believed to offer good luck, fertility, power, strength, stability and wisdom to those who make use of this symbol.

In feng shui in particular, an elephant with its trunk up is believed to provide you with good luck, which is often why you see it placed near the front door to homes and businesses, and also why some casinos have included statues of elephants in their architecture.

The four-leaf clover is undoubtedly one of the best-known good-luck charms in Western cultures. This is primarily attributed to St. Patrick’s Day, which has become a common celebration in many countries, even though it’s actually the three-leaf clover that’s symbolic of this holiday.

What makes the four-leaf clover so special is the chance of finding one is actually quite low – being somewhere between 1 in 5,000 to 10,000. If you come across one, you’ll be happy to know that each leaf on the four-leaf clover offers you faith, hope, love and, of course, good luck.

You will find these amulets in abundance, particularly as tourist souvenirs that people have brought home from Turkey. The word “Nazar” comes from Arabic and means “evil eye,” which doesn’t sound particularly lucky, but it actually protects from ill will or negative energy.

The belief is that when someone – your opponents at the casino table, for example – congratulates or compliments you, there can be jealousy or ill-will that comes with the words. People believe that wearing this amulet reflects their “evil eye” and negative thoughts and energies away from them, thus protecting them from unwanted thoughts – or in our case, protecting a hot streak at the tables. 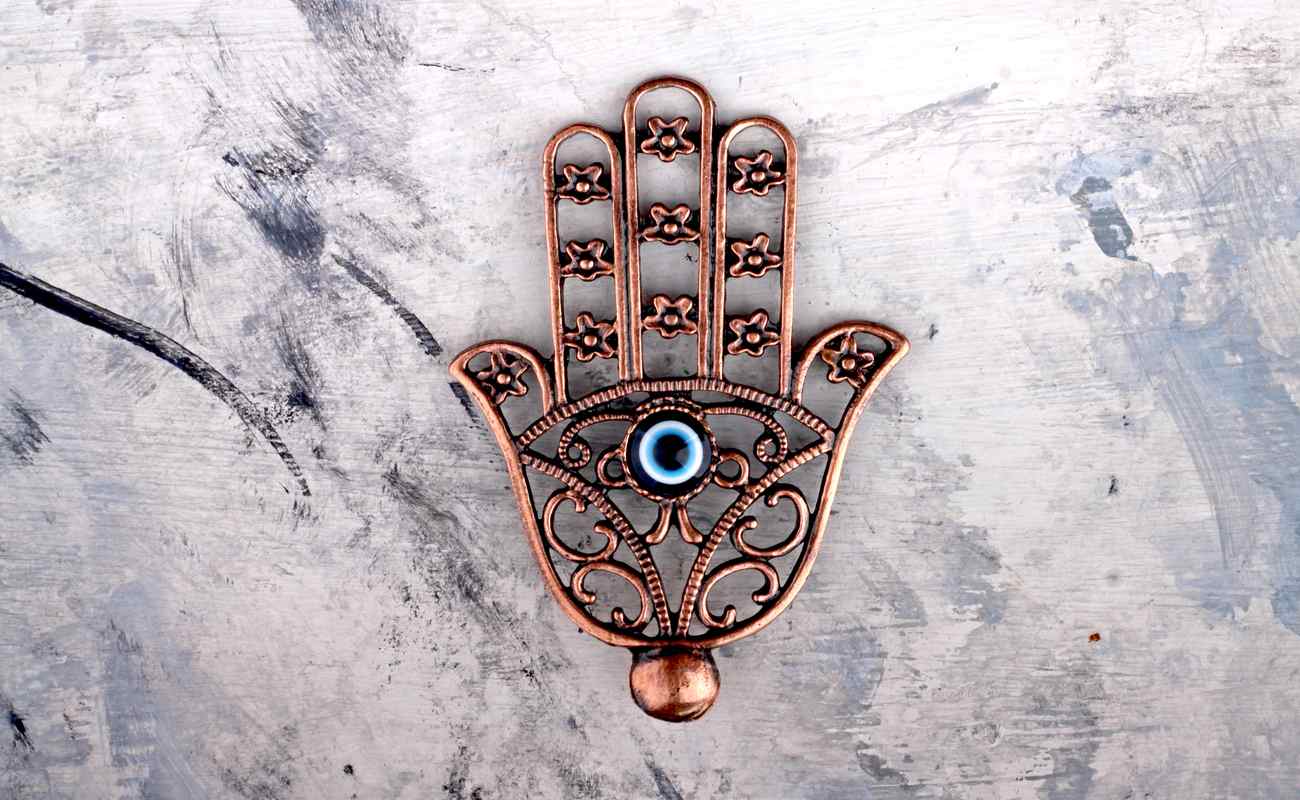 The Hamsa hand is one of many lucky symbols in Middle Eastern and North African cultures. This charm is often depicted as an eye on a palm, which many believe adds to its ability to protect them against the evil eye – just like the Nazar amulet.

There are two types of Hamsa hand, each with different effects. The first, with its fingers spread apart, is supposed to help protect against evil. The second, with its fingers together, brings with it good luck.

Fans of real or online slot machines will undoubtedly recognize the horseshoe symbol, another icon that’s associated with luck in many Western cultures. This is likely due to a Christian legend involving St. Dunstan.

Jin Chan, Chan Chu, or the three-legged toad, is another feng shui charm that’s associated with attracting and protecting wealth, in addition to protecting people against bad luck. Knowing this, it’s unsurprising that the most direct translations for the name of this talisman are “money toad” or “money frog.”

While this good-luck charm is more commonly known as the Laughing Buddha, it has little to do with Buddha himself. It’s actually based on the image of a Chinese Zen monk called Hotei, or Pu-Tai. The happy smile and large belly resulted in this artifact becoming a popular symbol across Japan and China.

While most of us are familiar with the sitting or lying-down versions of the Laughing Buddha, there are actually many poses for this charm. One of the designs has him holding a bag of coins, and it’s this pose that’s typically associated with good luck and financial prosperity. (This might be a good one to have with you when you play slots online, for instance!)

“Find a penny, pick it up, and all day long, you’ll have good luck.” Some believe that finding any penny on the street is a sign of good fortune, while others believe only a penny that’s found lying heads-up will have the same effect. Whatever you believe, many still trust their lucky pennies to bring them good fortune.

This modern belief may be connected to times when metals were less common, and finding metal of any kind was believed to be a gift from the gods. 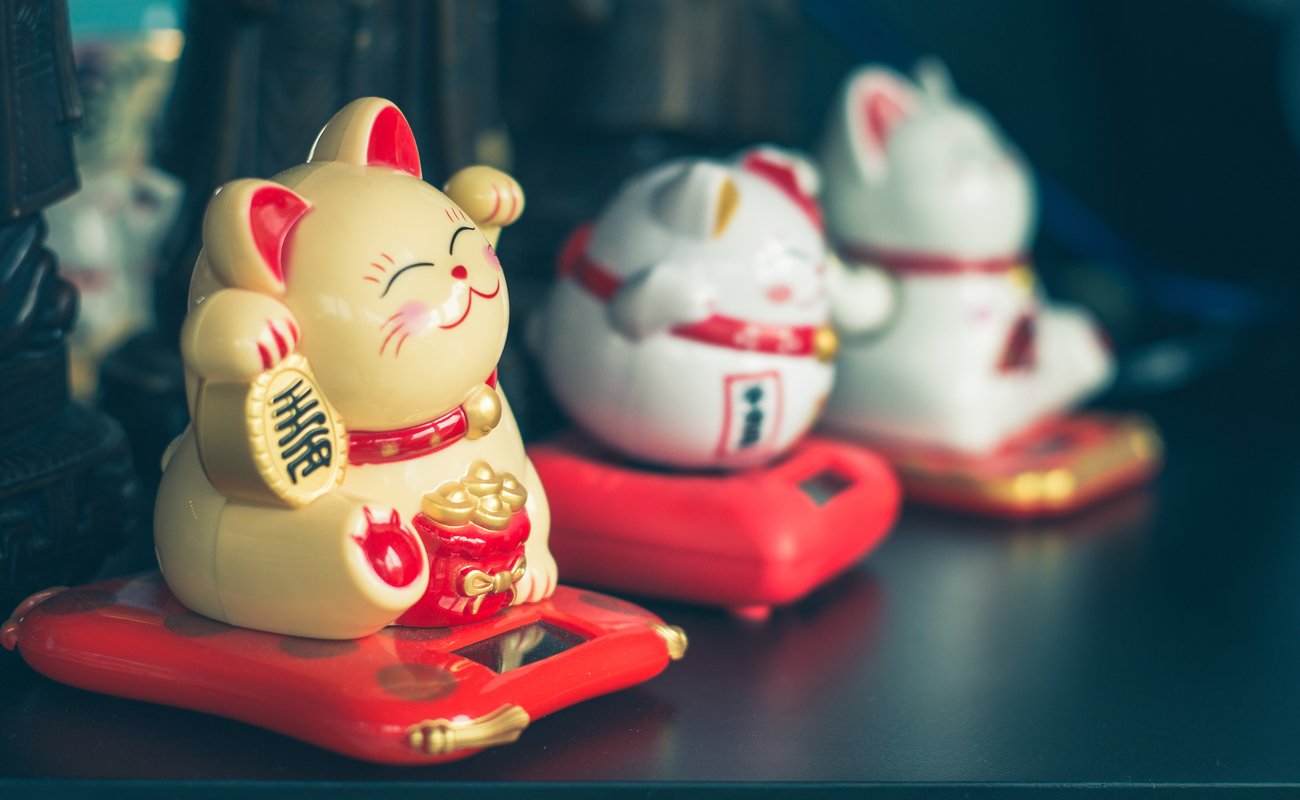 Maneki Neko, otherwise known as the beckoning cat, is a hugely popular Japanese good-luck charm. This talisman can be found in many different sizes, with larger versions often located outside restaurants and other businesses that are hoping to be successful.

The exact origin of Maneki Neko is lost to time, but one of the most common stories about it involves the Gotoku temple. One day, a nobleman was passing by when an intense storm broke out. He took shelter under a nearby tree but noticed a cat gesturing for him to come into the temple not long after. Curious as to why this cat was acting this way, he walked away from the tree, only for it to be struck by a massive bolt of lightning moments later. The nobleman later became a patron of the temple to thank the cat for saving his life.

In Germany, pigs are often associated with good luck. Nowhere is this clearer than the German phrase “Schwein haben” (literally, “to have a pig”) and its symbolic meaning of having a stroke of luck. The importance of the pig in German culture and history can also be connected to “Glückschwein” (a confectionery item), as well as its numerous references in the language and in other aspects of German culture.

The idea that pigs are talismans of luck may be attributed to people’s relationship with pigs in the past, when owning a pig was associated with wealth.

Of course, we’ve already mentioned acorns and a four-leaf clover, but if you’re looking for lucky indoor plants that will brighten up your home, as well as bring a little bit of good fortune your way, then lucky bamboo will be right up your alley!

This is probably the most renowned lucky plant of them all and despite its name, it’s important to realize that it’s actually part of the Dracaena plant family rather than a true bamboo. This plant is synonymous with bringing good fortune to those that keep it, especially in South East Asia, where it originates from. This is a fuss-free plant that requires indirect sunlight and slightly damp soil.

The belief that a rabbit’s foot can bring you luck is common in many regions of the world, including Africa, China, Europe and parts of North and South America. However, not any rabbit’s foot will do; oftentimes, the foot must be acquired using a certain ritual, or it would be useless in bringing the wearer good fortune. It’s undoubtedly one of the strangest lucky charms used throughout the world.

The exact origin as to why a rabbit’s foot is believed to be lucky is not always clear, as the role of the rabbit in different cultures varies from region to region. For example, many African cultures view the rabbit as a smart and tricky creature, which is likely why its foot is viewed as lucky.

If you’re going to play online casino games in Canada, then you should probably take note of the most popular Canadian lucky charm out there: The Lucky Loonie. The legendary tale started at the 2002 Winter Olympics in Salt Lake City, when a loonie (one Canadian dollar) was embedded at center ice before the games began to bring luck to Canada’s hockey teams.

Both the men’s and women’s teams won the gold medals and since then, the Lucky Loonie has been synonymous with luck in Canada. The Royal Canadian Mint has released Lucky Loonie coins for other important sports events and we’re sure that more than a few people hold onto them when playing online slots in Canada.

Enjoy a great gambling experience, with or without lucky charms

Regardless of whether you have a talisman of good fortune or not, it’s important that you play casino games at a great online casino with a wide variety of fun and exciting games that you can enjoy, including some of the best online slots around.

From roulette and blackjack to poker, BetMGM – one of the best online casinos in Canada and the USA – has a wide variety of casino games for you to play. Of course, if you prefer virtual slots to casino table games, you could try your hand at our jackpot slots. Or, if you love the atmosphere of a real casino, why not check out the live dealer online casino services we offer?

Whatever your interest in gambling, BetMGM has the best casino games to play. Register with us and put your lucky charm of choice to the test.