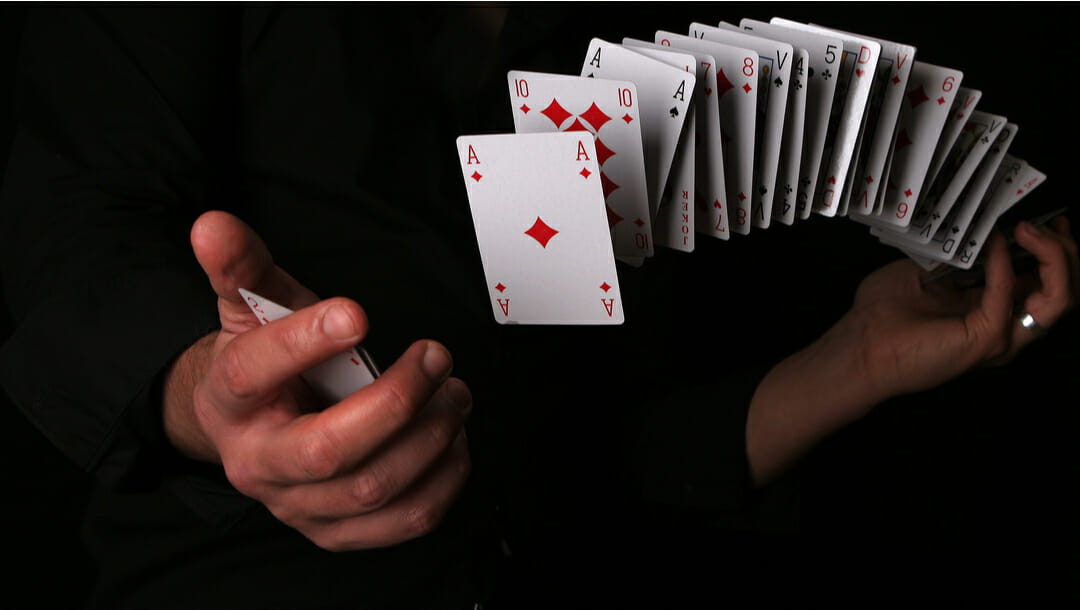 Ever wondered how high you could throw a playing card, how much the most expensive cards in history sold for, or how many people have played in an online poker room at the same time? Look no further. We’ve gathered some of the weirdest and most interesting playing card world records that have ever been set. Let’s check them out!

Highest throw of a playing card

On March 14, 2015, Rick Smith Jr threw a playing card higher than one had ever been thrown before at the Great Lakes Science Center in Cleveland, Ohio.

The 41-year-old professional illusionist and card thrower managed to fling a card 70ft 3in into the air. Thirteen years earlier, on March 21, 2002, Smith broke the world record for the farthest playing card thrown at 216ft 4in. While he’d also held the world record for throwing playing cards with the most accuracy (50 cards into a 12in radius target,) it was broken in 2021 by Travis Stich.

If you’re interested in picking up some skills as a card thrower between playing your favorite online casino games, you can find plenty of how-to videos online, but Smith does have one advantage over most throwers out there – he was an NCAA Division I pitcher at Cleveland State University during his college years!

Many of us have tried to stack a house of cards when we’re seriously bored and there’s nothing going on (don’t knock it until you’ve tried it.) But some people take building card structures very seriously. American Bryan Berg is one of these people. On March 10, 2010, he completed a structure in Macau, China that was 9ft 5.29in high, 34ft 1.05in long and 11ft 7.37in wide. It took him 44 days to complete and was made up of 218,792 cards. He also holds the world record for the tallest house of cards, which reached 25ft 78in and used 1,100 decks of cards!

Fastest time to arrange a deck of cards

Now here are some guys who’ll give our live online casino dealers a run for their money! As if it isn’t impressive enough to deal 126 cards in one minute, Brian Pankey did it with only one hand! The person who holds the record for dealing a complete deck in 14.19 seconds is Swede Simon Akerblom.

In the shuffling stakes, Zdenek Bradac of the Czech Republic managed to arrange a deck of shuffled playing cards in 36.16 seconds on May 15, 2008 at Sheffield Castle College in South Yorkshire in the UK. Then in September 2017, Strahinja Stamenkovic of Serbia set the record for the most riffle shuffles in under a minute – 31 times, but even more jaw-dropping is Dan Sheikh’s record of most riffle shuffles in 15 seconds – eight times!

If you think playing cards come in one size, think again! The biggest cards on record that are part of a complete pack are 62.3in high, 41.1in wide and weigh 440.9lbs! The deck was created by Claes Blixt of Sweden, who took the record in May 2016. At the other end of the scale, the smallest deck in the world was made up of cards that measured 0.275in by 0.196in. The record was set by Ramkumar Sarangapani of India on November 18, 2020.

Would you fork out $143,104 for a deck of playing cards? An anonymous buyer was willing to pay this large sum of money for a pack on December 6, 1983 at a Sotheby’s auction in the UK. The cards were the oldest known complete set dating back to around 1470, and we do believe they were hand-painted and quite attractive. The biggest poker tournament in the world is the World Series of Poker (WSOP) Main Event. The largest prize pool was $82,512,162 at the 2006 Main Event: It was won by Jamie Gold, who took home the first prize of $12 million.

The second-largest prize pool outside of the WSOP was the 2012 Macau High Stakes Challenge, which had a $260,000 buy-in. With 73 entrants and 21 of these making a rebuy, the prize pool totalled $23.5 million.

Whether you prefer to play live poker online or play at a brick-and-mortar establishment, it won’t be long before Phil Hellmuth is brought up in conversation. The 57-year-old professional poker player, originally from Wisconsin, has 16 WSOP bracelets – the most in the world. Also known as “The Poker Brat” for his crazy antics at poker tournaments, Hellmuth won his first bracelet in 1989. He also holds the records for most WSOP cashes (154) and most WSOP final tables (64). By November 2021, Hellmuth had clocked up more than $26 million in live tournament winnings.

Most players in an online poker room

According to the Guinness World Records, the most people to play poker online at the same time in one online poker room is 307,016 individuals, who played at 42,814 virtual tables on September 6, 2009.

While most people can’t imagine doing any one thing for 48 hours 55 minutes and 58.5 seconds, American Damon Shulenberger managed it, playing in the longest non-stop poker event that went on from December 13 to 15, 2013 at Pasay in the Philippines. It was organized by the Asian Poker Tour and Resorts World Manila Iron Man Poker Challenge (Philippines.) Shulenberger took home a rather modest $18,240 as the winner of the event.

Enjoy some of the best online poker at BetMGM

Whether you prefer to play live poker games or online poker tournaments, we have plenty of variety for you, including more than 70 daily tournaments plus our Network Sunday $35,000 Tournament, which gives you the opportunity to participate in one of the biggest Sunday Majors around! It’s easy to register at BetMGM, and we offer an unbeatable poker experience no matter what your choice may be!