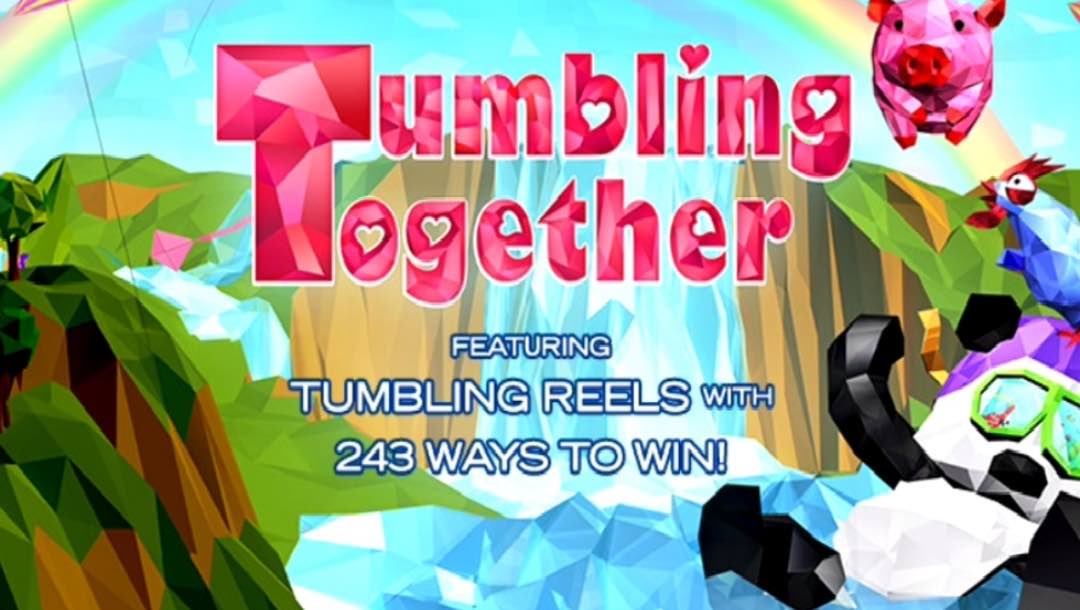 Most gamblers have a list of the online casino games and online slots that always keep them coming back for more, but there’s something exciting in trying out a few new titles from time to time.

Are you looking for one of the internet’s best casino games to explore further? Discover the top ten new releases added to the ever-expanding menu on the BetMGM site in May and June 2022.

Known for its cute and quirky graphics, Tumbling Together by High 5 Games is one of the best online slots for players who enjoy laid-back gaming. It’s a medium volatility slot with a Return to Player (RTP) of 94.9%. It offers a maximum win of 500x your stake and comes with a Tumbling Reels feature, which, when triggered, instantly awards you a prize! The symbols will then continue tumbling to create even more winning lines.

Slingo is an enthralling combo of bingo and casino slots, giving gamblers a fresh take on two of their favorite casino games. While there are plenty of Slingo games to explore, Slingo Inca Trail is definitely up there with the best. Take a trip to stunning South America, where you’ll enjoy the above-average RTP of 96.47% and a maximum win of 5,000x your stake. Watch out for the Inca Trail Bonus feature, where you’ll have the opportunity to trek your way to Machu Picchu and grab lots of great prizes upon your arrival.

SG Digital’s medium- to high-volatility title, Dave Lame Bad Magician, is a quirky slot game with an RTP of 96.10% and a maximum win of 4,048x your stake. The cartoonish magic theme is somewhat nostalgic, and the game’s diverse blend of features makes it stand out from other slot titles of its kind. You can look forward to Dave Lame’s Disappearing Act feature, where Dave Lame appears on both sides of the reels and boosts paylines to pay both ways for up to five re-spins). You’ll also enjoy the Pick A Pot feature, where five red cups are shuffled around, and you have to choose one to trigger one of the five different bonus games.

A Red Tiger release, 1942: Sky Warrior is a digital slot with a World War II theme that allows you to take control of the skies as a daring fighter pilot. Another medium-volatility game with an RTP of 95.68%, 1942: Sky Warrior is celebrated for its realistic graphics. It offers a maximum win of 600x your stake and a free spins bonus round. The bonus round is triggered when you land the free spins symbols on reels 1, 3 and 5, following which you’re instantly awarded ten free spins. You’re guaranteed a wild symbol for every free spin, so the chances of landing winning combos are much higher.

Developed by High 5 Games and licensed by IGT, Lucky Horse is a slot game that takes high rollers to the races. It’s a fantastic choice if you also enjoy sports betting! While the graphics are simple, the game promises a host of exciting features to look forward to, including a free games bonus, expanding wilds and Lucky Horse wilds. It’s rounded off with a decent RTP of 95% and medium volatility for well-balanced gameplay.

Spin Bandit is a favorite online slot machine played with real money for gamblers who aren’t especially charmed by over-the-top graphics or themes. Its simple visuals are bright and appealing, and there are plenty of features to get excited about, such as the mini slot round.  What’s more, Spin Bandit is known for its jackpot bonus game that can be triggered anytime during gameplay – aptly named “The Big One.”

Rage of the Seas

Another of NetEnt’s excellent casino slot games is Rage of the Seas, which takes you onboard an eerie pirate ship. The title boasts high-definition graphics and plenty of fearsome pirate characters. Its six bonus games and its Boost feature (which offers one of five random features that will apply to the reels during the following spin) mean it’s always sure to dish out loads of excitement. The maximum win is a whopping 27,440x your stake, and the game’s RTP is 96.04%.

Another no-fuss digital slot is Double Diamond by IGT. It boasts a classic fruit theme and vibrant neon styling like many sought-after slot machines found on any traditional Las Vegas casino floor. It’s a top choice for a nostalgic spin session and ideal for gamblers who prefer a combination of high- and low-stake play. The game’s RTP is 95.44%, and its volatility rating is low to medium. 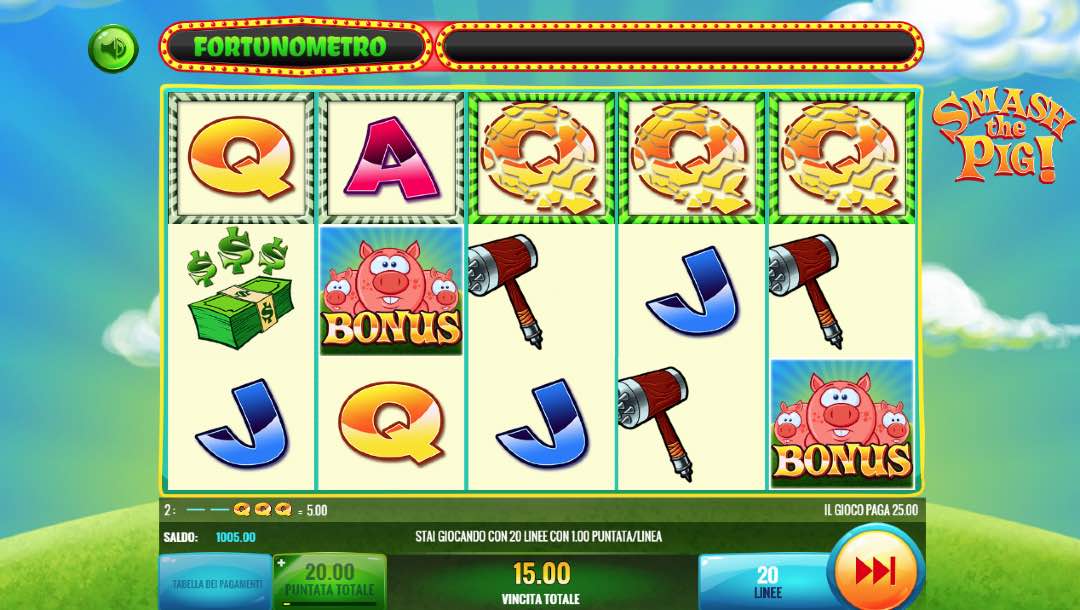 Spielo’s Smash the Pig is a cartoon-style slot machine that offers a decent RTP of 96.17% and a generous helping of farmyard fun! Its standout feature is its “pick-a-pig” bonus game, where you choose piggy banks to smash at random, ultimately revealing a variety of different prizes. Keep smashing with your eye on the luck meter, which indicates how much time is left before the round comes to an end.

Lucky Pharoah, an Egyptian-themed game, is one of Blueprint Gaming’s high-volatility online slots played with real money and gaining popularity among gamblers of all experience levels for many reasons. While it has a slightly lower-than-average RTP of 94%, it makes up for this in its exciting Power Spins bonus round (which increases the RTP to 96.25%.) The game’s visuals are also charmingly simplistic, featuring classic jewel symbols and a highly profitable diamond symbol, paying out a maximum of 50x your stake when you match five on a payline. 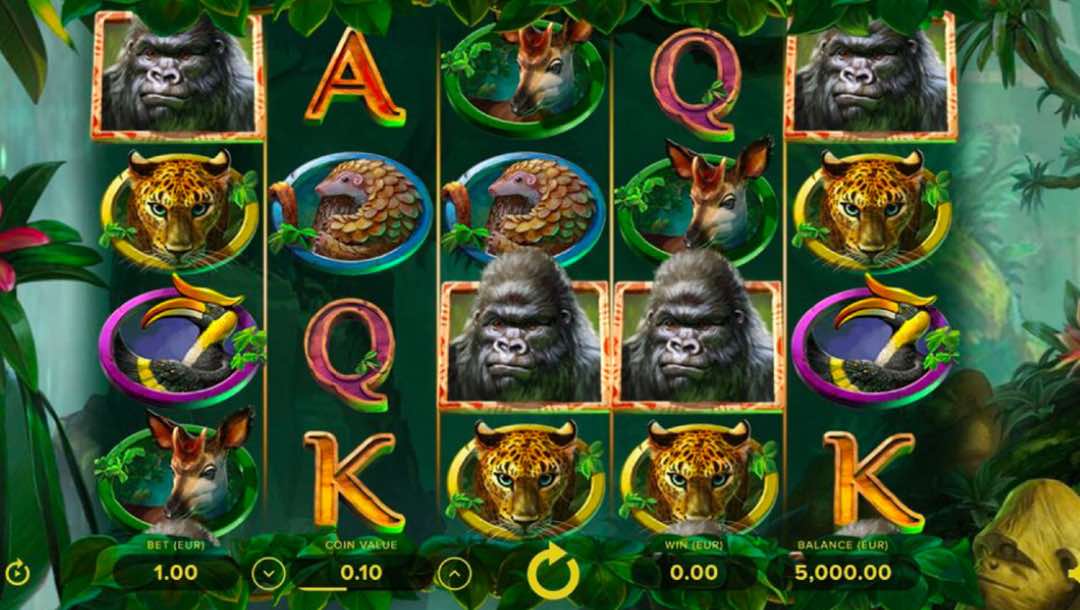 The Gorilla Kingdom title from NetEnt is a nature-themed digital slot machine. It’s set in a lush tropical paradise and offers an RTP of 96.03% and a maximum win of 4,096x your stake. It’s best-known for its symbol transformation feature that takes place during the free spins round to maximize wins. Another reason Gorilla Kingdom stands out is thanks to its multiple paylines: 1,024 in total!

Now that you know the best casino games that await you, you can feel free to join our online casino community and start exploring. Along with the best online slots, we also specialize in casino table games, jackpot slots, live dealer casino games, variety games and much more.

Go ahead and register via our convenient mobile portal to access the full menu of options.