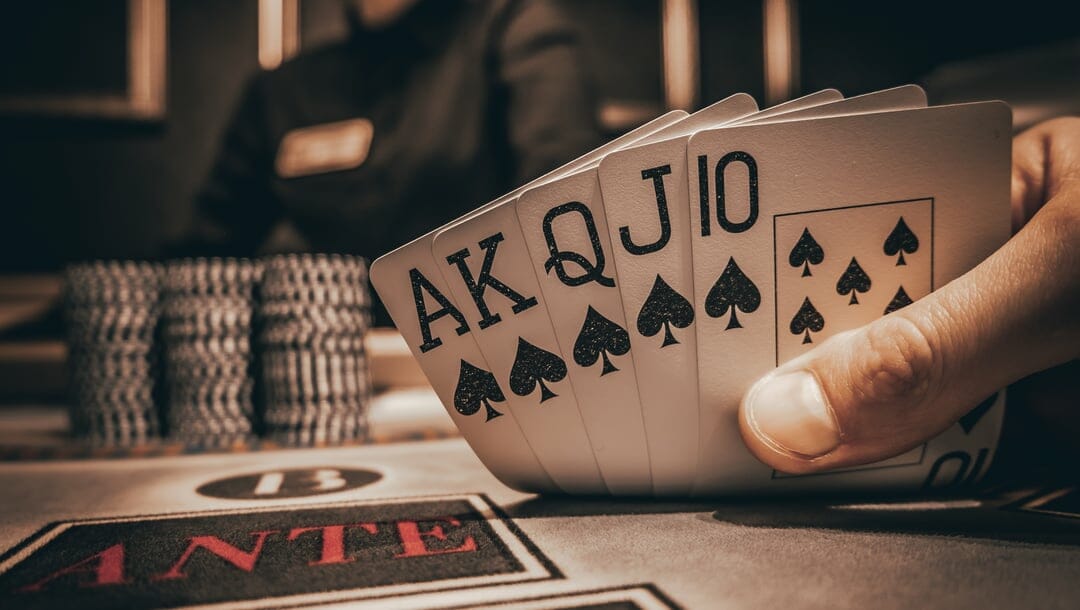 If you’re thinking about starting to play online poker or even if you’re relatively new to the game, poker terms can sound like a whole new language – welcome to the world of funny and confounding poker lingo! To get you started, so you know your “pocket rockets” from your “big slick,” we’ve explained many of the terms you’ll come across when playing poker live or online. Let’s get started.

When there is a draw in Texas Hold’em or Omaha poker variants that call for both the turn and river cards (explained further on,) a “backdoor” flush or “backdoor” straight draw means that running cards are needed to complete the draw.

A “belly buster” is an inside straight draw. For example, if you were holding 7 spades and 10 clubs on 6 diamonds, 8 spades and 4 clubs, you’d have to hit a 9 to make a straight. If the 9 did appear on the turn, the straight would be pretty well disguised and could result in a player “busting” another player.

“Check blind” is when players check without looking at their cards, which is why it can also be called “check in the dark.” This term sometimes means that a player out of position checks before the next street is dealt so the action is instantly on their opponent.

A “cold call” usually refers to when a salesperson or consultant makes an unsolicited visit or phone call to try to sell goods or services. In poker, a “cold call” can happen in a multiway pot that involves three or more players. Once a player bets and another raises, if a third player decides to call, they would call cold because they haven’t yet acted on the hand. A “cold call” can also occur pre-flop when a player opens and another three-bets, followed by a third player cold-calling the bet and the raise.

This is a two-pair poker hand made up of black aces and black eights. It’s called “dead man’s hand” because legend has it that these were four of the cards that were held by Wild Bill Hickok when he was killed in 1876.

Never try to wrangle with the “floorman!” This is the official in charge of an online casino cardroom or poker tournament who rules on important hands or incidents.

“Gutshot straight” is also called an “inside straight draw.” This is when players have the middle two cards of a straight as their pocket cards.

This is another name for the “high card,” which refers to the cards of a hand that help decide who has the better hand in the case of identical cards.

If you have the nuts, it means you’re holding the best possible hand at any point in the game which can’t be beaten. (Some players like to refer to it as the “stone-cold nuts” for extra effect!)

This poker variant is the second most popular after Texas Hold’em poker with some well-known professional players opting for the Omaha version of the game. This is because, despite being a challenging form of poker, certain aspects of the game are more controllable than Hold’em (with four hole cards being dealt in Omaha compared to just two in Hold’em.) Nobody seems to know exactly where the variant originated but what we do know is that World Series of Poker winner Robert Turner introduced it to a Las Vegas casino and it quickly gained a following. Turner has been vocal about his love of the variant, saying that while you can never be sure in Texas Hold’em if your hand is strong enough, in Omaha poker you know exactly where you stand.

“Pocket rockets” refer to two aces and they’re called this not only because they look like two rockets pointing up at the sky, but because they also represent the best possible starting hand in Texas Hold’em.

The poker term “rainbow” or “rainbow board” can be used in two ways. The first is a flop containing three different suits, which means that no flush can be completed on the turn, and the second is a complete five-card board that contains no more than two of any suit so no flush is possible.

A player’s “range” describes the types of hands your opponent is willing to play. “Range balancing” is all about working out what your opponents’ ranges are and the specific way they play them. This helps you predict their betting behavior and what they may be holding.

The river is the name given to the fifth and final community card (also called “fifth street”) that the dealer puts face up on the table in games such as Hold’em. Once revealed, it is followed by a final round of betting. All players who remain in the hand must show the strength of the cards they hold after the river action has taken place. Some believe that the term was coined on the Mississippi riverboats in the 1800s when the game first became popular in America, having been imported from Europe by traders. It’s said that cheaters, who had deliberately dealt a final community card that would improve their own hand, would sometimes be thrown overboard into the river if discovered. 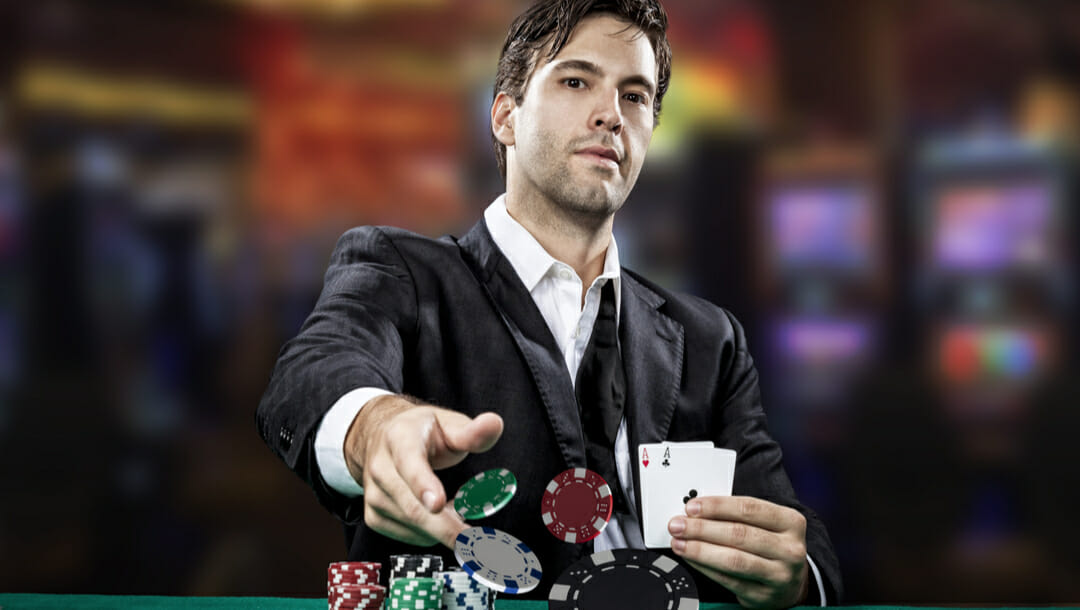 Compared to many of the poker terms on our list, “shot clock” is relatively new, having originated quite recently on the high-roller poker tournament circuit. It refers to the practice of giving players a specific amount of time (typically 30 or 60 seconds) to act on their hands. There is actually a physical clock on the table that counts down the time, and if players fail to act, their hands are declared dead.

This is a phrase that only crops up in live games where you’re playing in person. The phrase describes it exactly as it sounds: When a player basically throws a bunch of mixed casino chips into the pot with the rest of the chips (quite often when they’re going “all in,”) they are said to “splash” and become disorganized. This practice is often seen in poker movie scenes, but it’s really not cool to do this and we highly recommend you avoid this practice if you’re playing in person, because the dealer will frown upon it (as will your opponents!)

You probably would have guessed that the most popular variant in the world, Texas Hold’em poker, was invented a long time ago in Texas. But did you know that it’s called “Hold’em” because players must keep their initial two hole cards throughout a game? This game variant is of the community poker variety, in that all players are dealt five communal, or “community” cards, three of which they can use along with their two hole cards to form their best hand. Because these community cards are delivered sequentially (three as the “flop”, then the turn and river,) with a round of betting in between, it allows for the pot to grow as the action continues.

You never want to go on “tilt,” because that means you’ve allowed your emotions to get the better of you and as a consequence, are not playing as well as you could if you’d kept a cool head. Some players on “tilt” or who are “tiled” will adopt a style that is looser and more aggressive, while others will opt for a tight-passive style of play. Either way, your decision-making is likely to be negatively affected when your emotions are out of control – and your opponents will pick up on it and take advantage.

Sometimes also called “fourth street”, the “turn” is a fourth community card that is burned from the deck and exposed after the flop betting round. At this point, players now have six cards to choose from to make their best five-card hands with one more round of betting and another card still to be exposed.

Practice your poker lingo at BetMGM

A great way to practice poker, and familiarize yourself with all our featured terms, is to register to play poker online at BetMGM. You can get involved in immersive live games or opt into any of our exciting online poker tournaments that are still one of the best ways to learn the game and improve your skills. All the action is right at your fingertips here at our online casino, which also offers a wide variety of the most popular online casino games such as online slots and variety games.